Travelogue Bangkok: Part 1 of my trip report on Thailand. My first stop was like almost every other travelers as well, Bangkok. The capital of Thailand fascinates and polarizes their visitors alike and is either hated or loved. What I experienced there and if I hate or love this city, you can read in this travelreport.

Travelogue Bangkok – the first time in the City of Angels

After a 20-hour trip from Stuttgart via Berlin to Bangkok I had finally reached my goal. The warm air hit me immediately and was a welcome change from the cold and dreary winter in Germany. It had reached 19 clock in Bangkok and after a sleepless flight in economy class, I just wanted to get in a hotel room. I decided to go to the downtown for the fastest and most convenient option and took a taxi for 500 baht to Khao San Road. The prices for the ride into town are always the same. Just put yourself down to the exit of Terminal 1 and stand on the local taxi stands. A driver will be assigned to you. No fear of rip-off! This is all high official. The trip took about 1 hour and was only slightly delayed by the currently prevailing protests (luckily it was already evening and the worst traffic was already over). During the trip I could imagine what a vibrant metropolis of Bangkok is.

Having arrived at the Khao San Road, overwhelmed me once all the fuss on site. Many, no even a lot of people and a huge crowd. I had never imagined that extent. I did not want to fight me with my backpack through the crowds and decided not to search a room right on the Khao San .

I turned to go there towards Burger King and Starbucks on the Khao San to the left. There is a nice hotel, which is priced although rather in the upper range, but is very clean and brand new! I checked in for about 40 euro / night and I must say that I do not regret this. In the end I stayed there for 3 days before I finally moved on.

Exhausted from the long trip, I went to sleep immediately and looked forward eagerly to the next day. 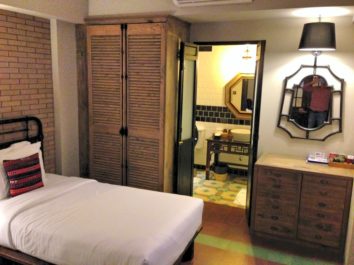 The next day was sightseeing in Bangkok on the program. Nothing easier than that. Get down on the street and in one of the many taxis or tuk tuks. I decided to speak a tuk tuk driver and he did agree with this route, which looked as follows: Khao San Road – Chao Phraya River / Klong trip – Temple Sightseeing – Thailand Fashion “Factory” – Khao San Road.

So I was driving all day through Bangkok free. The tuk tuk driver got his commission from the operators of the boat tours and Fashion “Factory”.

Astronomical sums for the one-hour tour trough the Klongs were called by the boat drivers.  But after tough negotiations, I achieved a price that was too high for sure yet, but who cares? For about 1200 Baht I had finally rented the entire boat to myself. The Klongtour on the Chao Phraya River led me in the poor district of Bangkok. Here the people live on the waterfront. The difference to the city center is huge here. Such Klong Trip I can only recommend and is an experience for sure! Even alone the fact that the small, light boats are driven by car or truck engines, awakens a little bit adventure feeling. 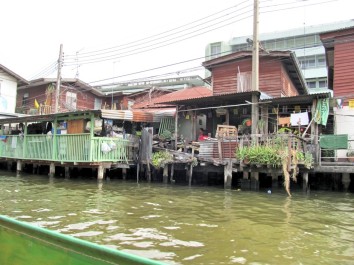 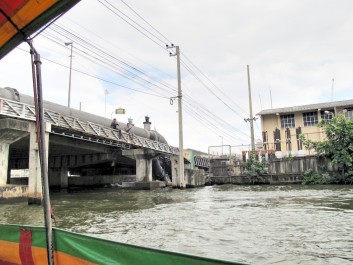 Back at the dock, the driver was waiting as arranged actually still on me. This experience I could do again and again and ultimately confirmed my impression of the honest and open nature of the Thais.

Next the adventurous ride with the modified tuk tuk went through the traffic jams in the city center to some small temples and Muay Thai schools. Everything was free, but also not such a great attraction that you must have seen this absolutely. Nevertheless, quite nice … 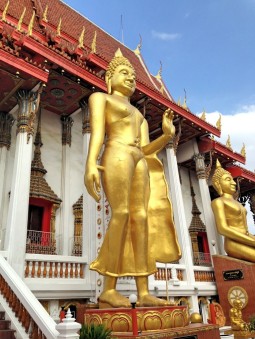 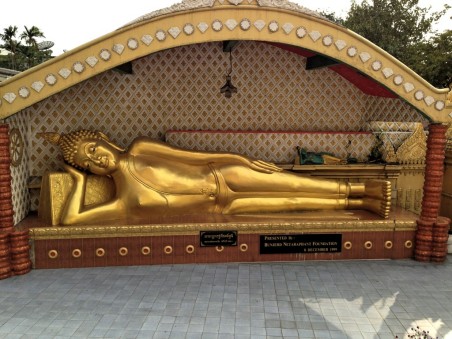 At the end brought me the nice driver to the Fashion Factory Thailand. Who thought a factory system or an outlet center here, as I did, will be bitterly disappointed! It was an Indian tailor in some little side street. However, what prevailed here for operation, was incredible. In one second many tourists of tuk tuks, taxis or minibuses were trucked here. The drivers get  for every tourist a gas coupon, which they can fill up their car.
Inside then the usual stuff: great shirts, suits and pants to “Super price!”. Get out here without buying something is difficult. The sellers were very pushy. I finally opted for a super silk tie for 400 baht (too expensive! Can buy there anywhere else from 200 Baht). Who really needs a shirt or “tailored suit”, can certainly be able to find and can be tailor something on the body.

After this disappointment, the driver headed back to Khao San Road and left my out there without demanding money.
In the evening I went once for dinner in the area around Khao San Road in one of the many roadside stands. Here you can get from 50 baht great food! Then a small foot massage for 120 baht. 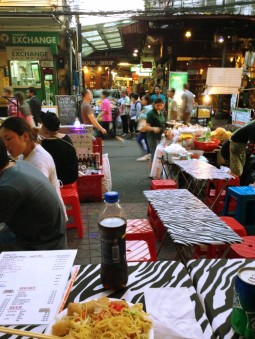 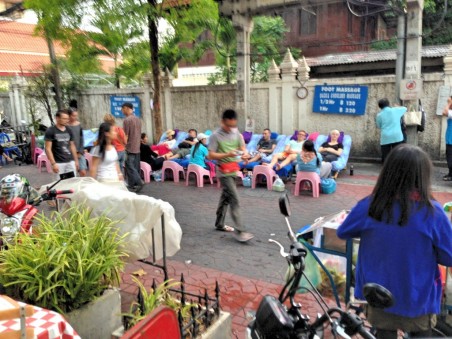 Thus fortified, I planned my evening program. I opted for the Lebua Hotel at State Tower to drive. There is the famous Skybar, which since the movie Hangover 2 each should be known at the latest. Unfortunately, it was not so! Hardly a taxi driver could do something with the words “Skybar”, “The Hangover” or “Lebua Tower”. Finally then helped the images on my smartphone, to identify the target.

Long pants and closed shoes are required here. The whole thing is very noble. Who does not meet the criteria, will be rejected and shall not to the very top. The ride up is free though. There is no entrance. But you have to order a drink in the bar above. The prices for the really excellent cocktails and the breathtaking atmosphere are but 500 baht per drink really moderate. In Germany you probably will not even get in a dirty bar around the corner a similar cocktail at this price. Not to mention the magnificent views.

After two drinks I decided to leave in the direction of Patpong, where every evening takes place the famous night market. I took a taxi for 500 baht. The problem here is that the driver doesn’t want to turn the taxi meter on and all drivers around want the same price. Here at night to get a fair price as a Farang is really very difficult.

On the Patpong night market is big bustle. There is hardly anything that does not exist. In the middle of the street traders rely on their stands, which are flanked by countless nightclubs, bars and GoGo shed. If you want a souvenir here, will surely find it. But negotiating is here travelers duty. After I had passed the night market, I ordered 2 cold Beer in one of the bars and watched the world go by before I finally went back to Khao San.

On the Khao San I allowed myself even a small locust / scorpion snack at the end of the day, and I must say that the cocktails and beers before facilitate things a little bit. 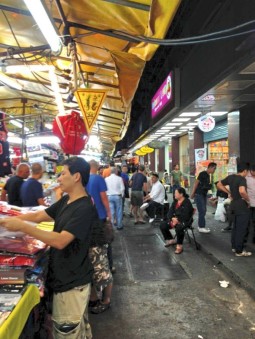 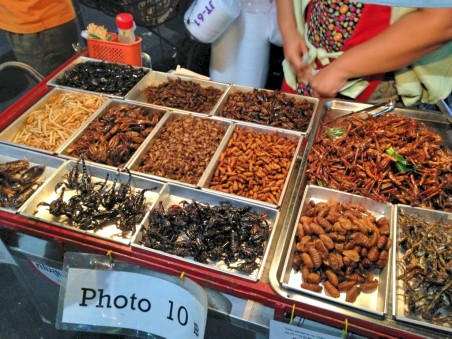 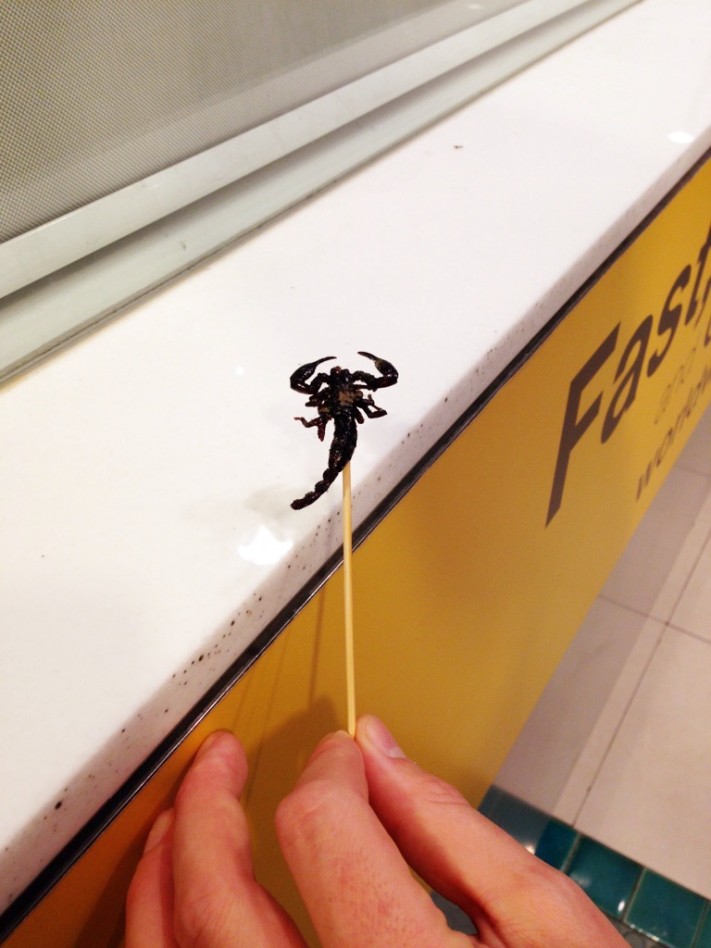 On the last day before my journey to Pattaya, I wanted to necessarily see Wat Pho. This temple is situated in the heart of the historic city and is home to the famous Reclining Buddha and Wat Pho Massage School also. Wat Pho is well known by really any driver and therefore it was also no problem to getting there. For entry 150 baht will be charged. These even include a bottle of water per person during the visit. Wat Pho has pleased me very well. The temple complex is clean and really nice. Unfortunately, however, somewhat crowded. Rest and relaxation are definitely not to be found here. Some visitors who were already 10-15 years before here, told me about it, that there was absolute silence and you were able watching the monks during meditation. Those days seem to be over. Nevertheless, a visit in my opinion is worth and not only because the budhha, but also because of Watpho Massage School. Here the masseurs are still trained in the traditional way. A Thai massage in Wat Pho was really so good that I couldn’t find some comparable in whole Thailand. Let that not to be missed! The waiting times are one hour, although quite long, but should be definitely taken. But first goes to Massage School, pull your ticket waiting and look at the temple in peace. Then returns to the agreed time for massage. The prices here are a little higher, but worth every penny. 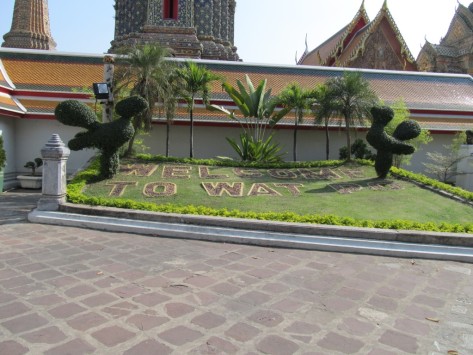 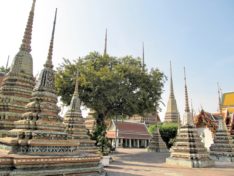 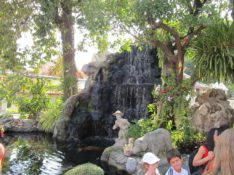 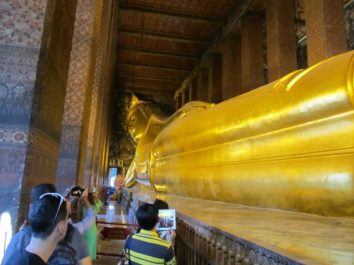 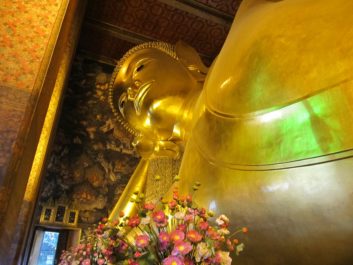 Then we went further to the Big Buddha statue. To my surprise, was really going nothing. The temple was absolutely free from tourists so at first I thought it would not be allowed to enter. However, this was not the case. So I looked around in silence and finally returned to Kao San Road. 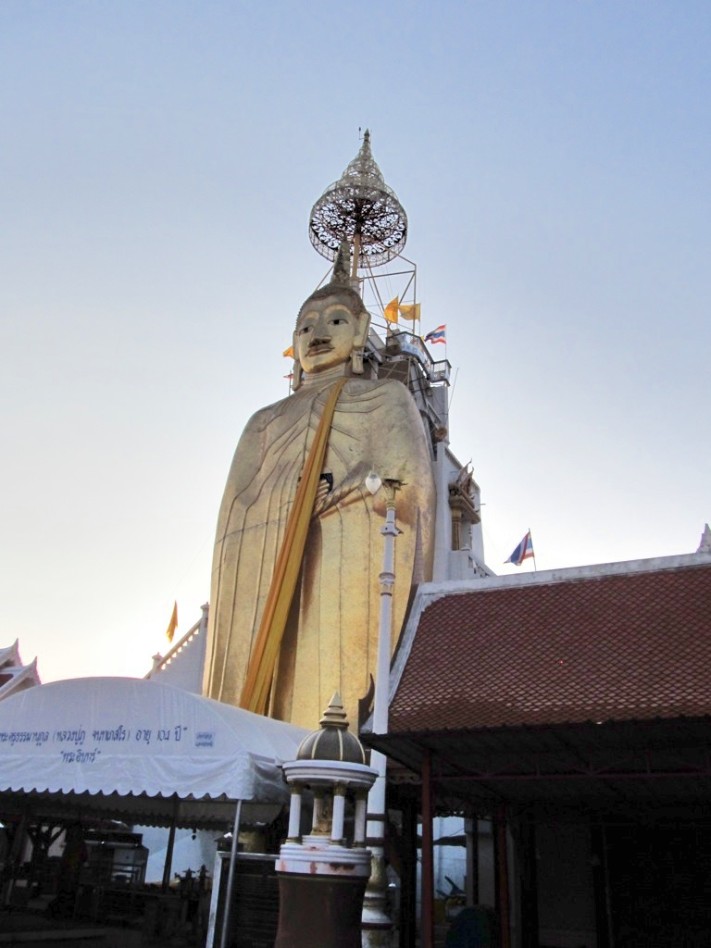 In the evening I celebrated in the legendary Golf Bar on Kao San Road, which more and more mutated at a late hour to a street nightclub. Here are ranging from students to backpackers from all over the world a wide variety of people to meet, celebrating extensively and enjoy life.
But had to travel to Pattaya early next day, so I decided to take it slow and leave early time. 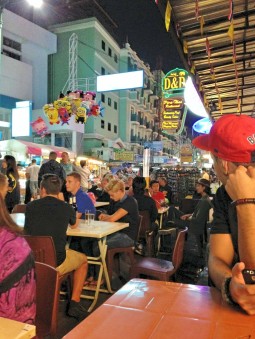 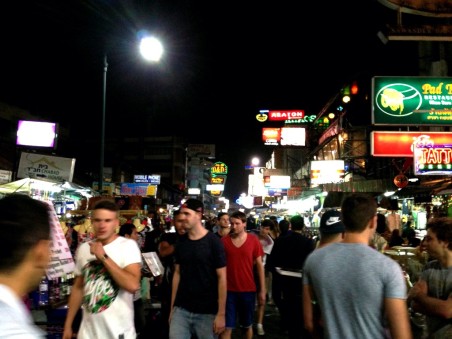 The next destination on my trip was the famous Pattaya. Although I had not seen anything from Bangkok, I knew that I would return again for sure.
So I bought a ticket for 300 Baht from Bangkok to Pattaya. The trip takes about 2-3 hours and is quite comfortable air-conditioned minibus. Here you meet many travelers and is involved with security in a nice conversation.

At the beginning of the trip report I mentioned that Bangkok polarizes people. I think this city is pretty impressive and have decided to love the buzz and the lifestyle in Bangkok. However, I can also understand very well that many people hate the hustle and bustle and the constant noise. I would call Bangkok a love on time. On one hand, you will be happy if you leave the city, on the other hand, the desire is after a while again so great that you want to return again and again.

Are you Bangkok Lover or Hater? What is the attitude you have about Thailand’s mega metropolis?